Plot : « Samuel Riba is about to turn 60. A successful publisher in Barcelona, he is increasingly prone to attacks of anxiety and, looking for distraction, he concocts a spur-of-the-moment trip to Dublin, a city he has never visited but once dreamed about.

He sets off for Dublin on the pretext of honouring James Joyce’s Ulysses on Bloomsday. But as he and his friends gather in the cemetery to give their orations, a mysterious figure in a mackintosh resembling Joyce’s protégé Samuel Beckett hovers in the background. Is it Beckett, or is it the writer of genius that Riba has spent his whole career trying, and failing, to find? » (source : amazon.co.uk)

I’m maybe more “touched” by this one (comparing to The Fall of the Stone City – I read both for the Independant Foreign fiction Prize 2013, with my Cardiff base Book club) because this character, Riba, is a publisher and a literary person, I love the way that he just lives in function of literature. I think the painting of this old former-alcoholic is true, you really feel in from of a human being.

There is not much of a story. It’s the difficult time of a retired man who doesn’t know what to do now with his life, all the more because of his inner life which forces him to ask himself a lot of question. He wants a change, and wants something foreign. So what is more foreign to a Spanish man than Ireland ?

Even if the “Spanish” and “Irish” atmospheres are really strong, it’s international, because everybody (I think) as experienced this need of being a foreigner, detached and a witness more than an actor.

Everybody as also too much interrogations in mind, doesn’t understand its friends & acquaintances on some occasions…

And for me, an author who uses a publisher as a main character is quite interesting (personal remark: I want to do it, but he’ll be the victim, not the main character :p ). I think it’s less main street than the Kadare because there is lot of literary & art references.  And in the same time, it’s a testimony of the exact opposite of Kadare: the testimony of A life opposite to the life of a city (I expect you get what I mean…) 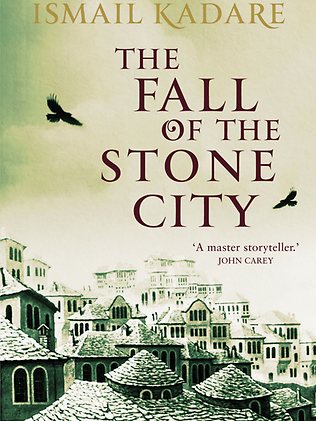 The destiny of a city, and of a man who seems is most important inhabitant from the 1943 to 1963. Kadare talks about the madness of war but in a city which is just occupied, so he could point the weakness of the nation, of people, the selfishness of all individuals which became the selfishness of all.

Everybody is obsessed by the dinner the big doctor Gurameto gave to the Nazi officer: at first he’s a hero, than a traitor, from the point of view. Kadare has lived under the communism order, so he could point the suspicion which changes a diner to save live in a plot to kill Staline… He ridicules the investigators, the order, he show how people let things go to prevent themselves.

Governments pass, but people remain the same. This situation could have taken place in any city of an occupied country, and the oppressors could be any oppressors of any dictatorship. I think it’s why Kadare is not really specific about characters (they are few, and it’s only in the last part of the book that they are more humans – feelings which command acts…). It worth reading because there is a testimony of a time, and a universal testimony (as I fell people will always remain the same, and adapt instead of fight).

I really like this in the light of the “Antic Tragedy” of the big doctor story: I think Kadare has the antic model in mind while writing because there are a lot of elements which remind me of Sophocles & Co:

Kadare succeeds in make me doubt about the genre of the book, it could be a lot of different thing, testimony, pastiche, historical but also supernatural, as I keep doubts at the end about the dinner: reality or dream of people. Even one of the doctors disappears, legend & reality mix (maybe people prefer not to remember their bad actions and cowardice)

more about the writer : Here.